Edwin Lewis Lybarger was the great-grandson of Ludwick Lybarger, Sr. (1735-1827), who traveled as a young boy with his family on the ship the Snow Betsey from the Rhineland (now southwest Germany) to Philadelphia, one of the many immigrant families responding to William Penn’s encouragement to “seek peace and security in the Province of Pennsylvania.” Ludwick’s seventh child Andrew Lybarger (1778-1855)  married Naomi Thompson and brought the family by covered wagon to the new state of Ohio in 1809, buying farmland near Coshocton and later establishing a tannery in Danville. Andrew and Naomi’s oldest son was James Thompson Lybarger (1804-1864), Edwin’s father.

James T.’s first wife died in 1830 after a few years of marriage, leaving an infant son, Thompson Lybarger. James T. married Amelia Crum in 1833. Their first son Elijah was born in 1838. Edwin Lewis Lybarger was born September 29, 1840 in Blachleyville in Wayne County, Ohio. His middle name came from his maternal grandfather Lewis Crum, who brought his family from Virginia in 1834 to Highland County,Ohio, where he operated a grist mill.

In 1848, James T. moved his older son Elijah, wife Amelia, and eight-year-old son Edwin to Millwood, Union township, Knox County, Ohio, managing a hostelry at “The Caves.” Edwin attended Millwood Academy, where from the age of fourteen his lifelong abilities as a public (and patriotic) speaker were first demonstrated in school orations with titles like “History” and “Our Country.” He was a serious and handsome young man when he graduated from Millwood Academy in 1858.

His plans to attend Kenyon College in Gambier, Ohio were apparently thwarted by his wagering all of his college savings ($14) on an unbeatable horse that lost the race. Suspecting trickery he could not prove, Edwin vowed never to gamble again–and never did. He went to work to re-earn his tuition money, possibly as a teacher for a short period. But his schooling was put on hold again when the Civil War broke out in 1861. With friends from Union township, Edwin enlisted in Millwood resident William Walker’s company of volunteers on November 25, 1861 at Camp Andrews in Mount Vernon, Ohio.

Captain Walker’s Company K was assigned to the 43rd Ohio Volunteer Infantry regiment commanded by Colonel J. L. Kirby Smith, and departed Camp Andrews on February 21, 1862, joining the Army of the Mississippi in the bombardment and capture of Confederate strongholds at New Madrid, Missouri, and Island No. Ten in the Mississippi River. Brig. General John Pope assigned four Ohio regiments (the 27th, 39th, 43rd and 63rd) to Col. John Fuller’s 1st Division, 2nd Brigade. Fuller’s “Ohio Brigade” earned its impressive reputation in a series of hard-fought Union victories. By April of 1862, Edwin was promoted to 2nd Lieutenant. He recorded his experiences in small pocket diaries throughout the war, and kept up a steady correspondence with numerous friends and family members.

On the morning of October 4, 1862, in the Battle of Corinth, Mississippi, while defending Battery Robinet, Edwin was wounded in the right knee by a Confederate minié ball. He later recorded in his diary: “The engagement commenced at 4 in the morning. Was wounded about 11 A.M. and left the field. Repulsed the enemy.” Edwin’s 43rd regiment suffered many casualties, including the death of regiment commander, Col. Smith. General Rosecrans praised the courage of the Ohio Brigade as a major cause of the Union victory. Edwin spent the next three months in hospitals in Corinth and Paducah, Kentucky, keeping his leg and regaining the ability to walk.

From the start of 1863, the Ohio Brigade served in the Army of the Tennessee’s 17th Corps. On Christmas Eve, 1863, virtually all of the Knox county men of Company K re-enlisted for three years or the duration of the war. From November of 1864, 1st Lieutenant Lybarger served as quartermaster of the 43rd Ohio regiment during Gen. William Sherman’s March to the Sea, also taking temporary command of Company A. He recounts the foraging work during the march, collecting wagon loads of cabbages, potatoes and other farm produce, along with corn for the horses and mules. In Savannah, Georgia on New Year’s Day 1865, he recorded in his diary, “Nothing nice to eat and nothing good to drink.” But it was a source of pride that while he was quartermaster, the men of the 43rd Ohio rarely went hungry two days in a row. He ate so much rice when marching through the Carolinas in early 1865 that he would never touch it again, no matter how it was disguised in puddings or other ways. Lybarger declined promotion to Captain in order to stay at his post as quartermaster (and 1st Lieutenant rank). In civilian life after the war, however, he was widely known as Captain Lybarger.

On May 24, 1865, Edwin marched with Sherman’s Army of the Tennessee in the Grand Review in Washington, D.C., witnessing “Over one hundred thousand citizens crowd[ing] Pennsylvania Avenue, from the Capitol to the White House, to witness the grand pageantry. And the Heroes of Sherman were greeted as never an army was greeted before.” The 43rd Ohio mustered out July 13 in Louisville and Edwin returned home to Millwood, Ohio on July 21, 1865, “no more to be disturbed by the sound of the bugle and the clash of arms … glad to return to civil life and thankful that my life had been spared whilst hundreds of my comrades had been left in unknown graves …” Although he did not bear feelings of hatred for the South, he felt keenly the injustice of the war the South began, and never visited it again. In 1912, he published “Leaves From My Diary,” his daily account of Sherman’s March and the Carolina campaign.

After leaving the army, Edwin did not attend Kenyon College, needing to support his mother since his father’s death in 1864. He read law with William R. Sapp in Mt.Vernon, Ohio for a short time, although he never practiced law. He received a Teacher’s Certificate in Knox County on Nov. 4, 1865. From 1866 through 1880, he was in partnership in the general merchandising business in Spring Mountain, Coshocton County with Isaac Baker, a former comrade in the 43rdOhio.

He married Sophronia (“Phrone”) Warren Rogers on January 27, 1867. Later that year or early the next, they had a son who died as an infant. Theirs was a devoted marriage; on their wedding anniversary in 1876, separated from Phrone, Edwin wrote to her, “I know what a noble, kind hearted, and generous minded woman you are. I thank God that you are mine and that I am yours.”

In 1867, Edwin was elected to a three-year term as justice of the peace forMonroetownship. A life-long Republican, he was first elected to the Ohio State Legislature for a two-year term in 1875, and served as a delegate to the Republican National Convention in 1876, nominating Rutherford B. Hayes.

In 1882, Lybarger and Phrone both contracted typhoid fever, and were nursed by his mother Amelia. Although Phrone seemed to recover, she relapsed and died May 13, 1882 while Edwin remained delirious, unaware of her death and unable to attend her funeral. Recovering only to learn of her loss, he entered a deep period of grief, erecting a large monument to her in the Workman Cemetery at Danville, Ohio. 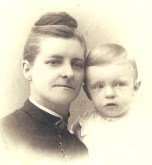 After a two-year courtship, he married Nancy Moore of Spring Mountain, Ohioon December 10, 1885. Their only son was born in 1888 and named Harry Swayne Lybarger after the 43rd Ohio commander Edwin greatly admired, Col. Wager Swayne.

In 1888, Edwin was defeated in his bid for election to the U.S. House of Representatives. He remained in a merchandising partnership with 51stOhio veteran Sampson McNeal until 1890, when he moved the family to Warsaw, Ohio and there affiliated with the firm of Wright, Lybarger and Funk. He also built up his land holdings to 700 acres in Monroe township, raising sheep and selling wool. His interests also turned to banking, and he served as president of the Farmers and Merchants’ Bank of Warsaw, as well as vice-president and director of the Commercial National Bank of Coshocton.

In 1892, he purchased property on the Walhonding River, where summers thereafter were spent with family and friends living in cabins or roughing it in tents — pleased to be “in camp” again, although the old war injury to his knee caused him by now the need of a cane.

He remained active in Republican politics, serving as a delegate to the National Republican Convention in 1884, nominating James G. Blaine. He was re-elected to the Ohio State Legislature twice, in 1905 and 1907. The “Lybarger bill” he sponsored helped to create Ohio State University as the major pubic university system within Ohio. In 1906 he was appointed by the Speaker of the House to a special committee investigating corruption, due to the well-known rugged honesty of this Coshocton county man.”

Throughout this period, while serving on the elected State Board of Public Works, he helped manage Walhonding canals until they were closed after the 1913 floods; during his tenure, the construction of an annex to the State House building resulted in an efficient (and unheard of) surplus of funds returned to the treasury. As a member of the Horse Department of the State Board of Agriculture, he always made sure that Kentucky war veterans were in charge of judging horses at the Ohio State Fair because “they know more about horseflesh than anyone else.” He served as trustee for the Girls’ Industrial School, and trustee of the Masonic Home in Mansfield, Ohio.

Edwin remained in contact with war comrades throughout his life, and participated in numerous activities of the (veteran) Grand Army of the Republic (GAR), being elected in 1896 as Commander of the Department of Ohio for the annual Grand Encampment. Active in the Masonic Fraternity since shortly after the war, he rose to the rank of Grand Master of the Grand Lodge of Ohio in 1899-1900. He was also a member of Sons of the American Revolution.

In 1909, Edwin presented his son Harry with a check of $100 for his 21st birthday, with the wish that Harry buy an up-to-date dictionary and, at his mother’s request, a good pair of gold sleeve buttons. He added, “I hope you will not throw the rest away just because it is a gift and caused no work on your part.” Harry, after graduating from Kenyon College and Ohio State University law school, married Ethel Finney in 1913 in Coshocton.

Edwin suffered a stroke in 1916 and was in failing health thereafter. He died at home in Warsaw on June 27, 1924, survived by his wife Nancy, son Harry and four grandchildren: Nancy, Edwin II, Davida Margaret and Mary. He was buried in Valley View   “one of the largest funerals held in Warsaw.”

One contemporary account reported that, “His interests are varied, but all along lines of progress and improvement. He is a broadminded man who places a correct valuation upon life, its opportunities and its privileges.” A tribute published earlier, to celebrate his 70th birthday, concluded, “He has lived his life…as a deep student of humanity and a leading characteristic has been to make up his mind firmly and then ‘stay put.’ [We] love his cheery laugh and respect his words of wisdom. Captain, we salute you.”

Written from notes collected by his granddaughter,

who remembers him with pleasure.

With additional notes by his great-granddaughter,