in Brenschelbach, in the Hornbach Reformed Church (Lutheran),

in the Saarland in the Palatinate

immigrated to America in 1739 on board the Snow Betsey, to Philadelphia

Everyone in this branch of the Lybarger family in the U.S. is descended from one of the 3 sons

FROM THE RHINELAND TO THE COLONIES

As early as 1677, William Penn visited the Rhineland in Europe, urging people to seek peace and security in the Province of Pennsylvania. After obtaining a royal charter in 1681, Penn and his agents actively recruited settlers to Pennsylvania, which had principles of religious toleration, and a climate and soil similar to the Palatinate (a region in the Rhineland).

During the 1700’s, the trip from the Palatinate to Pennsylvania had three phases: 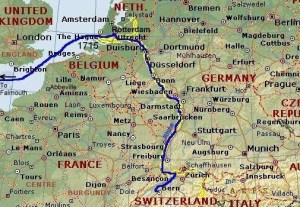 (1) travel by boat down the Rhine River to Rotterdam, Netherlands 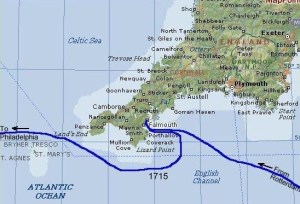 (2) cross by ship from Rotterdam to England port city 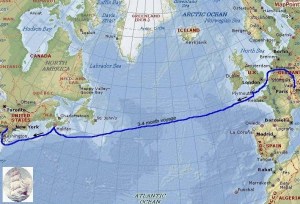 (3) cross the Atlantic Ocean from England to the Colonies.

Each leg of the trip could take several months. Many passengers, especially young children, did not survive the trip. Passage cost about $175, payable to the ship’s captain upon arrival either in cash, or by indentured labor. In German Immigrants to Pennsylvania 1683-1808, Richard Newhouse offers graphic details of the arduous journey by sailing ship. Gottfried Mittelberger also wrote about his 1750 trip.

Between 1727 and 1775, over 300 ships carried thousands of immigrants away from the ongoing warfare between princes, high taxes to support the monarchy, and marauding armies. Passenger lists exist for only 138 of these ships, usually listing only males over 16 years old because they were the ones required to swear allegiance to the British Crown when they landed in the British Colonies.

Spelling being variable in the 18th century, Nikolaus Leyenberger is probably the “Nicholas Leyberger” listed as a passenger on the Snow Betsy that arrived in Philadelphia from Deal, England on Aug. 27, 1739. He was likely in his early 30’s and accompanied by his wife and their two young sons, Nicholas and Ludwick. Years later, great-grandson Elijah F. Lybarger, was told by his grandfather that Nicholas and his wife had come on the “indenture plan” and worked three years to pay it off, in Virginia [or Maryland].

Nicholas & Maria Catharina and their 2 sons moved west from Philadelphiainto York County, Pennsylvania, to farm. Third son John George Lybarger was born. The positive characteristics of Pennsylvania Germans were described by Benjamin Rush (a Pennsylvania physician and signer of the Declaration of Independence) as a model for all citizens in the new country, in An Account of the Manners of the German Inhabitants of Pennsylvania.