In 1909, my great-grandfather Edwin Lybarger and his wife Nancy (Moore) traveled from Warsaw to Newark, Ohio for the GAR Encampment of Civil War veterans. They stayed with Uriah Brillhart and his wife Ida (Severn). The Brillhart family had lived in Spring Mountain, and Uriah would have been a young boy when Edwin returned in 1865 at the end of the war. 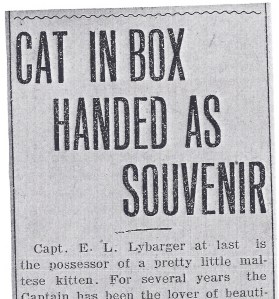 Among his papers, Edwin kept this old newspaper clipping:

“Capt. E. L. Lybarger at last is the possessor of a pretty little maltese kitten. For several years the Captain has been the lover of beautiful cats but could not keep them in his possession. He has bought them, had them given to him by the dozens but something happened to each of them, they either died or strayed away to some other place.

Capt. Lybarger was attending the G.A.R. encampment at Newark, Ohio this week and one day he was visiting at the home of Mr. and Mrs. Uriah Brillhart. The Brillharts owned a little maltese kitten which as soon as was seen by the captain captivated his heart. The Captain told Mr. Brillhart of his luck with cats and said that if he had any way of taking the kitten home with him that he would steal it. The conversation was then turned to other topics and the subject was dropped.

When the Capt. And Mrs. Lybarger were getting aboard their train for home Friday, Mr. Brillhart handed the general a small box saying that it was a souvenir of the encampment. After the train pulled out the box was opened and there snuggled up within the box was the baby cat. The captain carried the kitten home with him and it is now drinking milk and eating strawberry short cake.”

Abraham Lincoln loved cats and could play with them for hours. When asked if her husband had a hobby, Mary Todd Lincoln replied, “cats.”

President Lincoln visited General Grant at City Point,Virginia in March of 1865. The Civil War was drawing to a close and the enormous task of reuniting the country lay ahead, yet the President made time to care for three orphaned kittens. Abraham Lincoln noticed three stray kittens in the telegraph hut. Picking them up and placing them in his lap, he asked about their mother. When the President learned that the kittens’ mother was dead, he made sure the kittens would be fed and a good home found for them.